True legends never die, as proven by the iconic horror characters of Laurie Strode and Michael Myers. The duo, who clash over their values of good and evil, return to battle each other once again in the anticipated slasher film, ‘Halloween Kills,’ which Universal Pictures is releasing today in theaters and on Peacock.

The horror feature serves as the follow-up to the acclaimed ‘Halloween (2018),’ which itself is a direct sequel to the franchise’s original 1978 movie of the same name, which was co-written and directed by John Carpenter. ‘Halloween Kills,’ which is the twelfth installment in the series, marks the return of the filmmaking team who created its predecessor.

Writers Scott Teems, Danny McBride and David Gordon Green returned to the ‘Halloween’ franchise with its latest entry. The latter resumed his directorial duties, after also helming the previous installment. McBride and Green also served as executive producers on the eleventh follow-up, alongside Carpenter and Jamie Lee Curtis, who also reprised her role of Laurie Strode. Jason Blum also returned to the series to serve as a producer on the movie, through his production company, Blumhouse Productions.

‘Halloween Kills,’ which begins minutes after the ending of its predecessor, follows Laurie Strode (Curtis), her daughter Karen (Judy Greer) and granddaughter Allyson (Andi Matichak) as they leave masked serial killer Michael Myers caged in Laurie’s burning basement. As she’s rushed to the hospital with life-threatening injuries, she believes she finally killed her lifelong tormentor.

But when Michael manages to free himself from Laurie’s trap, his ritual bloodbath resumes. As she fights her pain and prepares to defend herself and her family against him, she inspires all of Haddonfield to rise up against their unstoppable monster.

The Strode women join a group of other survivors of Michael’s first rampage 40 years ago, including Tommy Doyle (Anthony Michael Hall), the boy Laurie was babysitting on the night of the original attack in 1978. The group decides to take matters into their own hands by forming a vigilante mob that sets out to hunt Michael down, once and for all.

Curtis and Matichak generously took the time last week to talk about starring in ‘Halloween Kills’ during a virtual roundtable interview. Among other things, the actresses discussed that they were further able to deepen the bond between Laurie, Allyson and Karen by living and working closely together during the drama’s production.

Jamie, Laurie is almost as resilient as Michael, and will stop at nothing until she takes him down. She’s a true warrior, but is on the sidelines for most of this film, after the first movie served as a study into her trauma. Can you talk about her journey in this film?

Jamie Lee Curtis (JLC): Yes, the first movie is about Laurie’s trauma. Meanwhile, this movie is about everyone else’s trauma, as well as the collateral damage of grief, rage and violence that have been perpetrated upon to this entire town by Michael. It feels like a next level chapter 2. Everything is amplified; it feels as though he escaped that fire and transcended.

I believe that if Laurie had die in the back of that truck, surrounded by her daughter and granddaughter, and Michael was dead, she would have died a hero’s death. She would have been happy and with a smile on her face.

But we pick up the movie with the fire engines starting, and we think, wait, what? He has risen and transcended this. He’s next level angry and violent. So it’s a movie about all of these other people and their rage, and what happens when a mob begins their attack, which is terrifying.

‘Halloween Kills’ delves further into the relationship that Laurie has with Allyson. What was the experience like of further building your characters’ connection throughout the sequel?

Andi Matichak (AM): I think the relationship was started in the 2018 movie and built upon here. I think Jamie was the one who really brought us all together. Both Judy Greer and I view Jamie as both our on- and off-screen matriarch.

One of the things that Judy and I were reminiscing about earlier that we felt was so special about filming ‘Halloween Kills’ is that we basically lived together in a little bed and breakfast in Wilmington (North Carolina) during the production. So we were able to be together the whole time, and build on the relationships we had. We sat on a big, beautiful porch and got to know each other a little bit deeper. We’d then go to work and fight Myers.

JLC: I think it’s generation-skipping, and Allyson is really Laurie. There’s this wonderful picture that a fan put together of Laurie in the classroom in 1978 and then you, Andi as Allyson, in 2018, and they’re side-by-side. It’s uncanny.

I think there’s something wonderful about the generation-skipping. Karen isn’t a warrior by nature; she’s an unexpected warrior and a worrier. But Allyson is much more in line with Laurie. It’s a beautiful thing to see, and was wonderfully done by David.

Laurie is such an iconic character. Andi, what has it been like for you to take on that mantel now, especially after the events of this film?

AM: Being involved in this franchise is such a privilege and honor. Not only that, but also being in a chapter that includes Jamie and John Carpenter is pretty unique and special.

As a character, I think Jamie is exactly right – Allyson is Laurie in so many ways. So seeing Allyson grow is amazing, as we didn’t really get to see Laurie grow as much in 1978. Through Allyson, we could see what might have been for Laurie in a different world. It’s a pretty interesting situation to be so young as you pick up the torch in a way that makes your grandmother proud.

**SPOILER ALERT** Jamie, this is the first ‘Halloween’ film you’re in that you don’t share a single scene with Michael Myers. What was your reaction to not only learning that, but also that his connection is expanding to the entire town of Haddonfield, which is rising up against him?

LJC: Laurie thinks Michael is dead in the beginning of the film, and she’s a wounded warrior. She’s been knifed in the stomach and had surgery, so she’s rendered impotent by this attack. So when we first meet here, she’s a wreck, as she just survived the surgery.

But as the movie progresses, I understood what David was doing. She’s the target and Michael’s the arrow. You now know that Michael’s trying to come to her, which is why the crowd shows up at the hospital…So she’s ready for him when he does show up at the hospital, and would take him down in order to save her family. I thought that was a really interesting choice that David made. **END SPOILER ALERT**

Jamie, building on that, at what point did you learn that this was going to be a trilogy? How important was it for you to know what Laurie’s arc would be over the course of the three films

JLC: I know people will be surprised by this, but I had no idea we were going to make a second movie while we were shooting the first one. We were doing ADR (automated dialogue replacement) for the first movie on the Sony lot, and David and I went outside for a break.

During that break he said: “We’re going to do another movie, and here’s what I’m thinking. It’s a trilogy.” He then told me what the second movie was going to be, and also alluded to what the third was going to be about.

It’s going to shock people and make them very angry. It’s going to stimulate people, and they’re also going to be agitated by it. It’s a beautiful way to end this trilogy.

That’s all I kind of knew from David. He and I have only recently started to talk a little bit, post Venice (‘Halloween Kills’ had its world premiere at last month’s Venice International Film Festival), about the third and final movie. I’ve offered a few little tweaks to the story because David makes great movies.

Jamie, you were reunited with several of your co-stars from the original 1978 film for ‘Halloween Kills.’ What was the experience like of working with them again?

JLC: There were tears. The main character Laurie interacts with from the original movie is Tommy Doyle, who’s played by a different actor in this film. But I also saw Kyle Richards and Nancy Stephens (who reprised their roles of Tommy’s friend, Lindsey Wallace, and nurse Marion Chambers, the retired former assistant to Dr. Sam Loomis). I also saw Charles Cyphers (who reprised his role of Leigh Brackett, the former sheriff of Haddonfield who lost his daughter in the 1978 killing spree) on set, and the first time I saw each of them, there were tears…It’s extraordinary that we’re doing this, 43 years later. 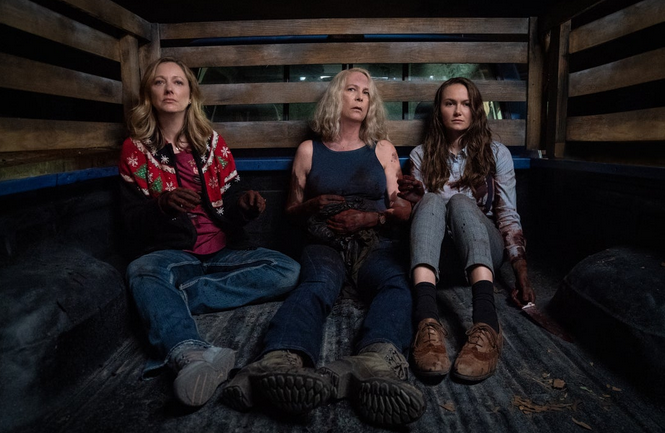