My name is Alki David – you may have come across my name in media articles relating to the California State Bar’s current activities with regard to Thomas V Girardi’s syndicated corruption across the CA State Bar. (LA Times / State Bar Audit)

As executive director of the State Bar you will be interested to know that Tom Girardi personally accused me of raping an employee of mine. First the woman was not an employee. Also this woman has since recanted. There is irrefutable evidence that she lied and is currently in hiding in the Middle East due to threats made by Girardi’s Syndicate. 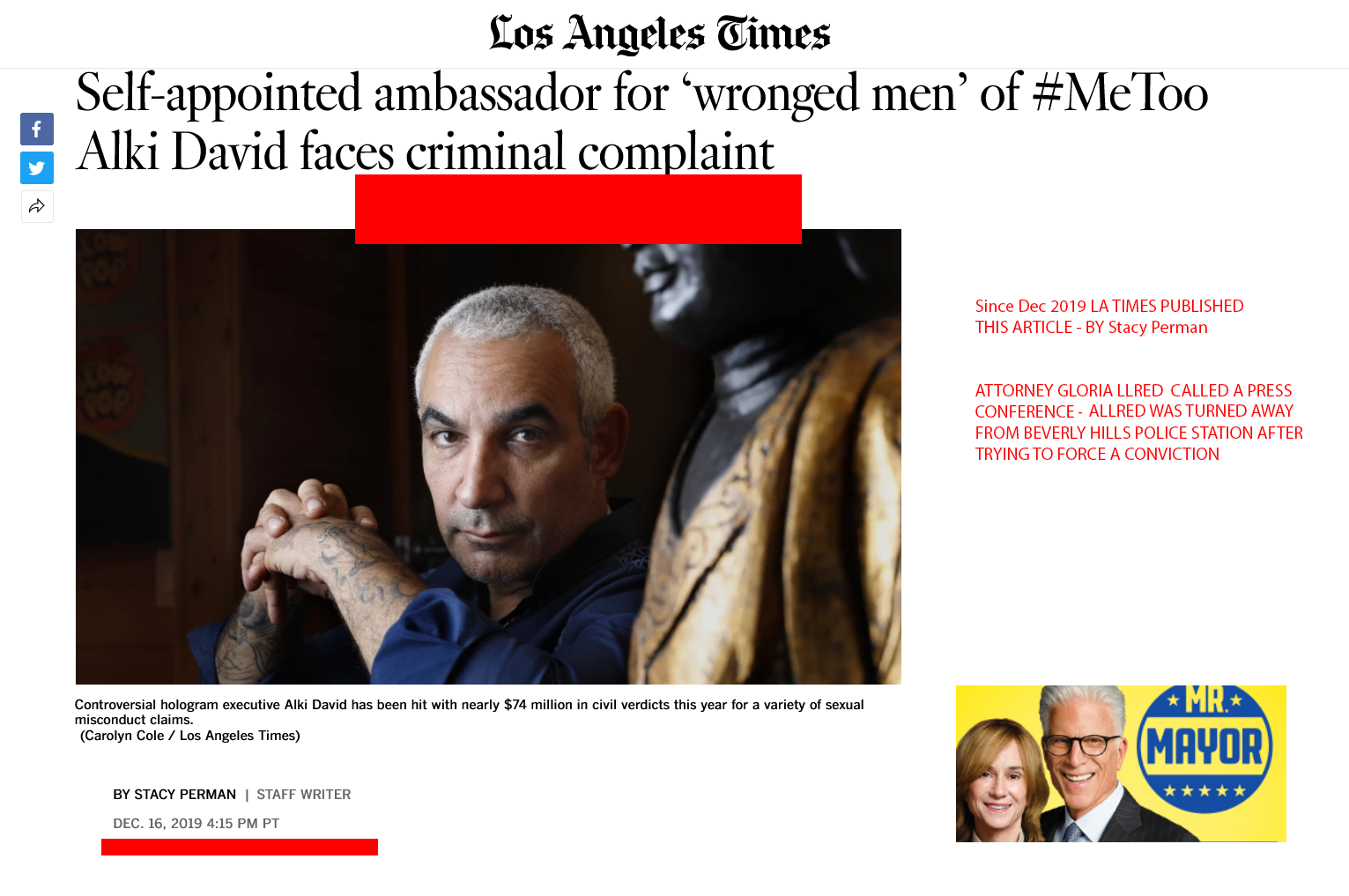 The trial which resulted in a Jury awarding battery and sexual harassment allegations, $ 54 Million in damages after much fixing by Gloria Allred’s fim and Judge Michelle Court. (Note Michelle Court went to see Allred because her husband was beating her. As one of several Whistleblowers have testified “Girardi got Court on the bench as favor to Gloria Allred, his alter ego. According to our Whistleblowers who all worked with Girardi Allred and Bloom over many years. 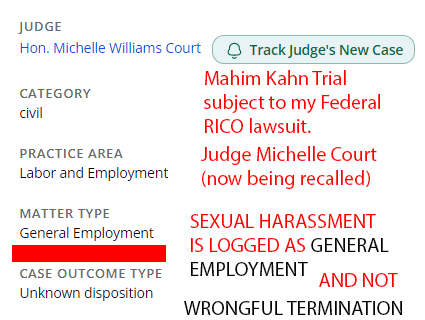 This criminal pattern repeats itself several times across the Girardi Network of Lawyers and Judges.

Bait and Switch. Sexual harassment becomes wrongful termination. But the damage is done.

see below – The Jane Doe case civil case against me in Jane Doe V Alkiviades David et al has become categorized as rape (aka General Employment) to “Wrongful Termination” unlike the vehemently disputed Mahim Kahn Vs Alkiviades David trial is today known to have been fixed. 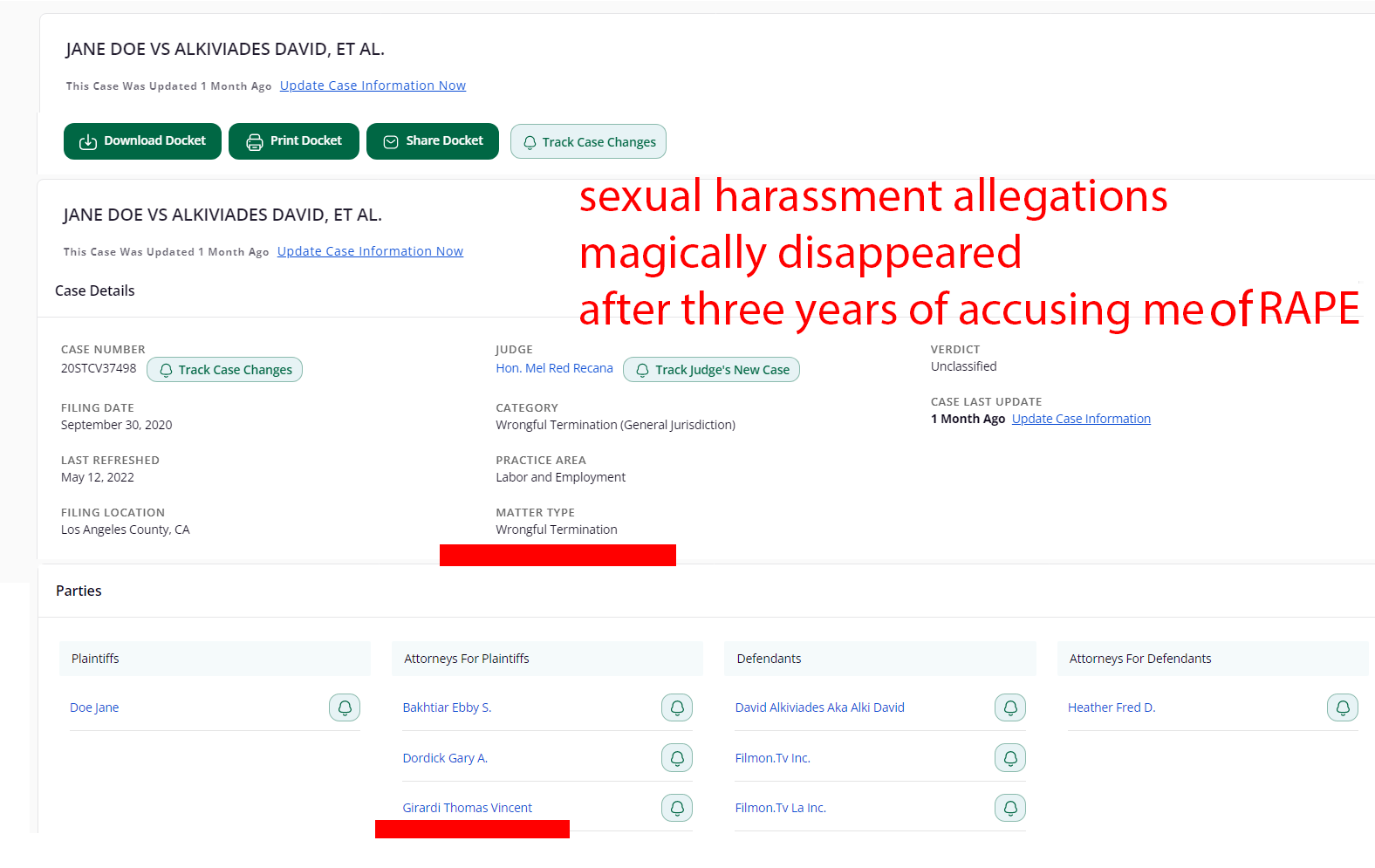 I am accusing Gloria Allred, her daughter Lisa Bloom and Allred’s alter ego, Tom Girardi of widespread corruption including the huge damage done to my own life.

Despite being sanctioned by the sitting Judge Michelle Court to have no witnesses, no testimony, no rebuttal. Then later have the appeal ignored by the appeals board; To then have the litigator Nathan Goldberg go on live TV and claim that I didnt want to put up a defense. Ridiculous is the only word I have for this. 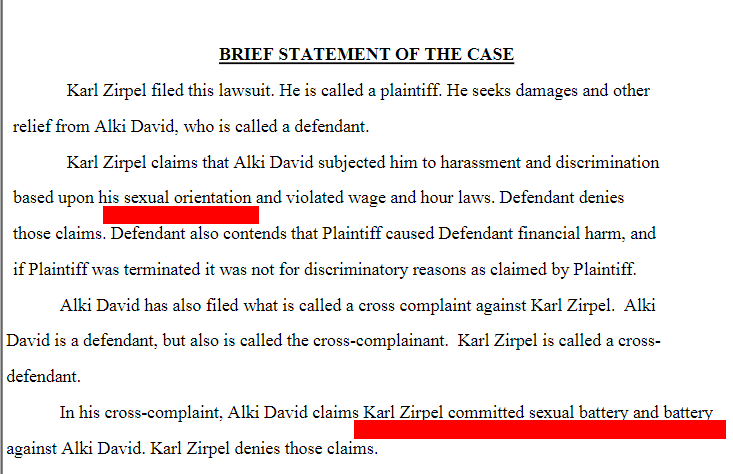 This civil court rape allegation is the “cherry on top” of the Gloria Allred / Lisa Bloom system of criminilizing innocents. By manipulating the media and corrupting the Judicial process to victimize innocent people and organizations. In the UK this is called perversion of Justice or “legal thuggery”.

I have been a very outspoken critic about my experiences of the Gotham like environment of the California Judiciary. I have and continue to accuse your organization the State Bar and it widespread corruption – Reuters

My three severe State Bar Complaints officially delivered to you and all ignored. And with plenty of evidence to show that this was influenced by Girardi et al.

I have never once had my day in Court Leah. Imagine that – a handful of orchestrated sexual harassment claims. Two of which were dropped on the actual day of Trial which became “unfair dismissal” complaints, after three years of dragging my name and my companies through the proverbial mud.

Due to the systemic corruption of the Judicial System at the Stanley Mosk CourtHouse, and the State Bar, I have never once had my day in Court. Never. I intend to.

Imagine that Leah. Even when I represented myself against Lisa Bloom (Elizabeth Taylor V Alkiviades David) The Jury returned 8 – 4 in my favor because they believed there was a Fraud on the Court. Despite the Court being loaded from the Start as Lisa Bloom would commit perjury in wholesale. 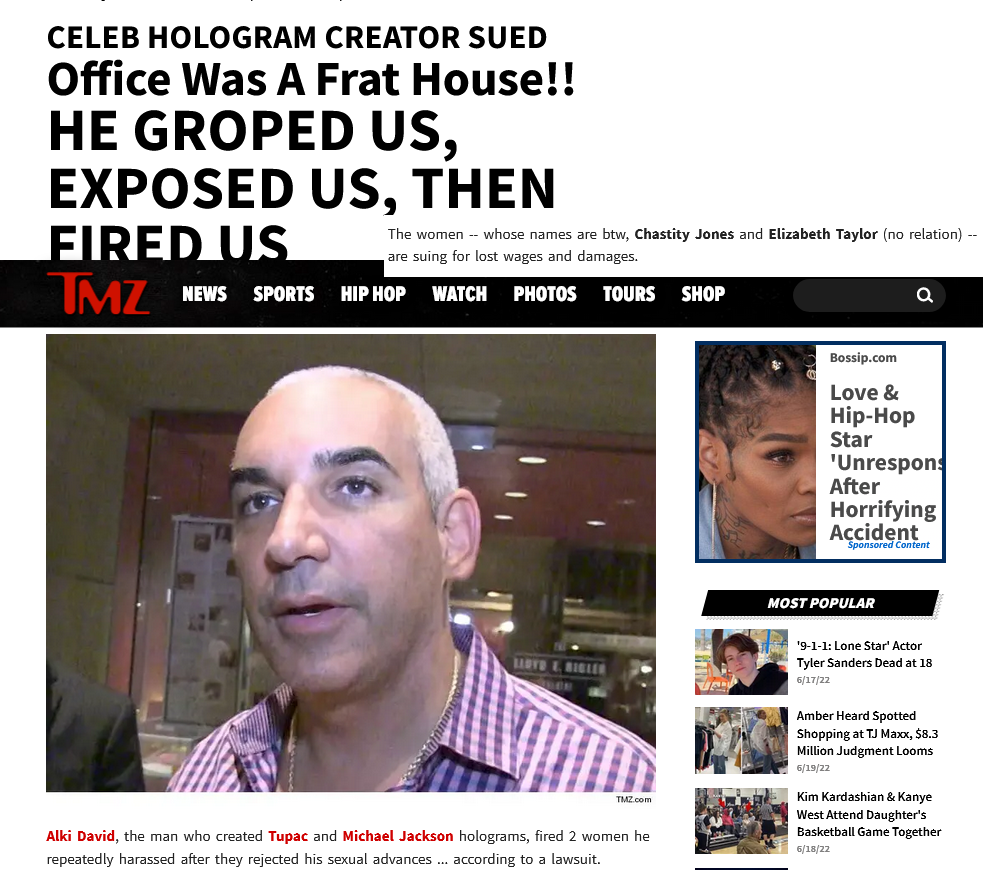 Like is the way this corrupt system works, Lisa Bloom exploited wrongful sexual harassment allegations which were like the others, dropped on the first day of Jury Trial. But after three years of exploiting this in the press. All sexual allegations are dropped. Elizabeth actually said in Court “Oh no Mr. David would never do that!” when asked about being groped. 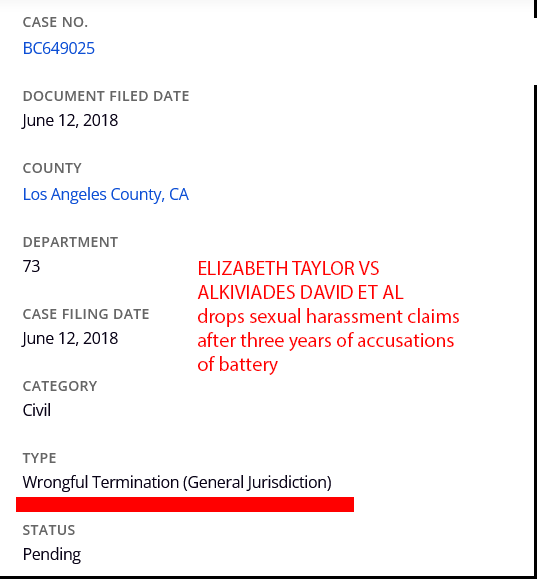 In my case Self-governing Judges who have been corrupted by Girardi et al; Judge Michelle Williams Court or Judge Yolanda Orozco for example; Are judges that have obvious conflicts with adjudicating cases like mine. Extreme egregious reasons. Regardless, these people are openly extorting me in Court hiding behind the cover of the Judiciary.

Although the FBI have and continue to investigate these matters; 70 k a year is not often enough for these men and women to care to go up against the entire Judicial machine of California.

Therefore it is left to people like myself who have had enough of being trafficked through this broken criminal system the State Bar is meant to police. I have taken it upon myself to build a strong team of lawyers including Alan Dershowitz, Blair Berk, Dana Cole, Glaser Weil Firm. I have several other firms in Switzerland, London and the Caribbean from where I am filing criminal prosecutions. They are at various stages of imminence.

In these affairs I am righteous Leah. There are many whistleblowers and ex employees who have never been voiced due to the corrupted process.. Several people who have either recanted or have been blackmailed by these people and have written adjudicated affidavits in my support.

My strength is my transparency and I expect to prevail in all matters relating to the State Bar of California and its corruption.

Therefore please reach out to me or any one of my representatives and let’s try to collaborate rather than continue down this dark road from which I will no doubt emerge victorious.

Despite my bullishness, my experience has been at times terrifying. I have even had run-ins with the Sheriff’s department in and out of courtrooms as direct result of Allred and Blooms manipulation of the Court System.

In this video you will the Sheriff’s in Malibu treat me with contempt. Two of my cars were stolen. A man broke in at night with intentions to commit robbery. A man nearly died (pick up driver) whilst I was being harassed by deputies.

Also in this video you will se me illegally arrested by the sheriffs who actually dragged out of my home with no warrant to do so. The Judge and DA lowered the fine from $10 000 dollars to zero. Internal affairs will investigate. Lawsuits will follow.

I have no criminal record anywhere in the world. The most jail time Ive done is 1 day for importing hemp to St Kitts. Which ironically turns out to be one of the international jurisdictions where I am in the process of issuing “red notices” for the arrest of Girardi et al, Bloom, Allred et al.