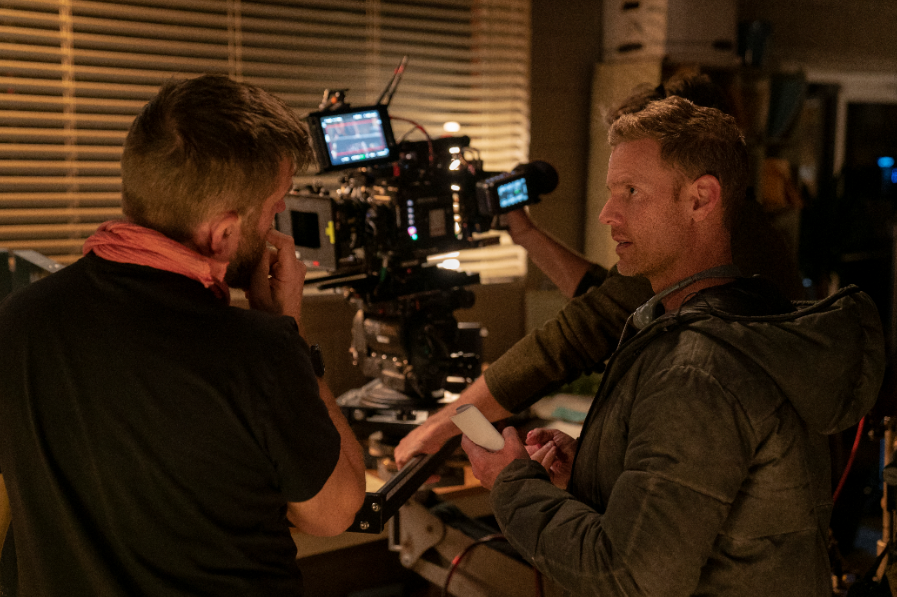 Continuously revitalizing under-served movie troupes, from minority characters being featured as protagonists to creative twists on sub-genres and unique stunts, in a clever way can be a career-defining experience for many filmmakers. Writer-director Christopher Landon has proven his versatility in recent years by reinventing his style in the horror genre. After leaving his mark on the supernatural sub-genre in the early 2010s by working on the ‘Paranormal Activity’ sequels, he grippingly moved into the underserved horror comedy sub-genre in the latter part of the decade with ‘Happy Death Day‘ and its sequel, ‘Happy Death Day 2U.’

The filmmaker reunited with his ‘Paranormal Activity’ and ‘Happy Death Day’ series producer, Jason Blum, and his production company, Blumhouse Productions, for his latest horror comedy, ‘Freaky,’ which Universal Pictures is distributing in theaters nationwide today. The thriller smartly mixes slasher elements with moments of humor as its protagonist, a teenage girl, inadvertently switches bodies with an older male serial killer, which leads her to fight back to reclaim her life. The scribe-helmer’s latest collaboration with the production company, which he co-wrote with Michael Kennedy, powerfully blends a genuine representation of all high school students, along with distinct elements in the slasher, comedy and body-swap genres.

‘Freaky’ follows 17-year-old Millie Kessler (Kathryn Newton, ‘Blockers,’ ‘Paranormal Activity 4′) is just trying to survive the bloodthirsty halls of Blissfield High and the cruelty of the popular crowd. But when she becomes the newest target of The Butcher (Vince Vaughn), her town’s infamous serial killer, her senior year becomes the least of her worries.

When The Butcher’s mystical ancient dagger causes him and Millie to wake up in each other’s bodies, Millie learns that she has just 24 hours to get her body back before the switch becomes permanent, and she’s trapped in the form of a middle-aged maniac forever.

The only problem is Millie now looks like the towering psychopath who’s the target of a city-wide manhunt. Meanwhile, The Butcher looks like her, and discovers that having a female teen body is the perfect cover for a little Homecoming killing spree. So with some help from her friends, including the ultra-the woke Nyla (Celeste O’Connor,’ ‘Ghostbusters: Afterlife’) and the ultra-fabulous Joshua (Misha Osherovich, ‘The Goldfinch’), as well as her crush, Booker (Uriah Shelton, ‘Enter the Warriors Gate’), Millie races against the clock to reverse the curse.

Landon generously took the time recently to talk about co-writing and directing ‘Freaky’ during an exclusive interview over Zoom. Among other things, the filmmaker discussed that he enjoys working with Blum and his production company, in part because of the freedom, flexibility and trust that he gives to his filmmakers. The writer-director also mentioned that he also feels that it’s important to feature the movie’s main characters breaking the stereotypes that are usually found in the horror genre.

The conversation with Landon began with the writer discussing what his collaboration with Kennedy was like on the screenplay for ‘Freaky.’ “My co-writer, Michael Kennedy, approached me with the concept for the movie. It was actually a pitch that he was going to go out with, and he wanted to rehearse it with somebody,” he shared. “I immediately fell in love with it, and we started bouncing ideas off of each other, and then we decided to write it together.

“So we wrote he script, and it was a quick process; it took us about three weeks or so. We then cleaned it up a bit, and gave it to Blumhouse and Jason. They read it and loved it, and they gave it to Universal, and they said yes, and then we were off,” Landon added.

Speaking of working with Blum, as well as his production company, the scribe then further discussed what his collaboration with Blumhouse has been like over the past decade, since their first movie, ‘Paranormal Activity 2,’ was released in 2010. “I’ve had a long-standing relationships with Jason Blum. We made all the ‘Paranormal Activity’ movies together, so I’ve known him for a long time,” he noted.

“What I love about working with Jason is the freedom, flexibility and trust that he gives to his filmmakers. So you really get to make the movie that you want to make, as long as you make it within a certain budget,” Landon continued.

“Universal has also been such an amazing partner because they’re risk takers with Jason. They really invest in these films, and throw the weight of the whole studio behind the filmmakers,” the filmmaker added. “So it’s really cool to be a small movie like ‘Freaky,’ but they treat it like any big release they have. They have an unbelievable marketing department that’s been helping us.

“They’re very collaborative and filmmaker friendly. I get to have a voice and real input in the process with them, and vice versa. So it’s been really nice, and I really adore all those people,” the writer also revealed.

In addition to cherishing the experience of penning the script, Landon also enjoyed the opportunity of helming the horror comedy. He admitted that “As a director, I’m still learning; it’s a never-ending education. So it’s really fun going from movie to movie, and being able to bring more knowledge and experience as I go along. I feel more and more comfortable with each movie. I’m a big movie geek, so I’m living my dream of being on set and watching these movies that have lived in my brain come to life.”

The filmmaker then went on to discuss what the casting process was like for ‘Freaky.’ “When we wrote the movie, I only really had Vince and Kathryn in my head, as they were the only people who I thought could pull it off. So I was really hopeful that they would say yes when we sent the script to them. I was shocked, to be honest, that they both said yes; it was a career first,” he admitted.

“Vince is a really versatile actor, and he’s physically imposing, and can be really intense. But he’s also incredibly charming and funny, so he fit everything I needed for the character,” Landon pointed out. “The same goes for Kathryn; she’s a really incredible actress, and very naturally gifted. She’s also incredibly kind and thoughtful, and also incredibly strong. She can bring her own intensity. So they were both perfect fits.”

Once Newton and Vaughn signed on to star in the film, the director enjoyed the experience of collaborating with them to build their characters. “It was really fun working with them. I started with video diaries, so I followed Kathryn around with a camera, and had her stay in character as Millie. That way, Vince could study that, and learn her mannerisms and physicality of the role, as well as get an inside perspective of who she was.

“Then we rehearsed a lot together, and learned a lot through that process. I’m a big fan of preparing in advance. That way by the time we get to set and the cameras are rolling, the actors have a lot of confidence in what they’re about to do,” Landon added.

Further speaking of the actors’ physicality, the filmmaker once again expressed his enjoyment of working with Newton and Vaughn on creating the stuntwork. “Again, I think a lot of that speaks to what he did in rehearsals, and making sure that there were distinct things, especially that Kathryn did as Millie that Vince could then do as well. There’s a lot of nail biting, and Millie plays with her hair a lot, and holds it in front of her face sometimes when she’s feeling shy. She also walks a little bit quickly. So there were all these mannerisms that we worked on,” he shared.

“The other cool thing was that both Vince and Kathryn did a lot of stunts. Vince is really good at this stuff; he has a second career as a stuntman, if he wants it!,” Landon enthusiastically praised the actor. “It was great to see these two people throw themselves at these parts, because it’s tricky to play two different characters in the same movie. But I think they did it really well.”

Besides crafting the slasher and horror elements in ‘Freaky,’ the helmer also embraced incorporating his signature humor into the slasher story. “I’ve always really enjoyed infusing comedy into whatever I do. It’s not something that feels deliberate; it’s more organic. I think the key to being successfully funny is to know when to be funny when a situation’s unfolding. I think the horror and comedy really complement each other, so it was easy to fuse those two elements together.”

In addition to the humor, Landon also felt it was important to feature the main characters breaking stereotypes that are usually found in the horror genre. “Michael Kennedy and I talked a lot about this in the beginning. We wanted to have a character like Joshua, who’s an openly out and very confident kid who’s arguably the most outspoken character in the movie,” he shared. “Nyla is also different. She isn’t the stereotypical African-American, and she’s also her own person, which is the way it should be.

“It’s not about the color of your skin or your sexual identity. So much of this movie is about the actual people, and not their appearance. So while we were making fun of some of the more known troupy characteristics, like the sh*tty jocks and the bitchy girl, our core characters are fully realized people, and I think that feels authentic,” the filmmaker noted.

With Universal Pictures releasing the thriller in theaters today, Landon respected the studio’s distribution plan during the current COVID-19 pandemic. “The theater experience is something that people are going to have to decide for themselves, in terms of if they’re comfortable doing that, and if it’s safe where they are. Of course, I think safety is the most important thing,” he noted.

“But people will also have the ability to see the movie at home shortly after the theatrical release,” the director added. In July, Universal Pictures made a historic agreement with AMC Theatres, which will allow the studio’s films to be made available on Premium VOD after just 17 days after their release in cinemas, including three weekends.

“While it’s hard to release a movie right now, I also think that we’re the right movie to release now. I think people need a movie like this right now. It’s been a really heavy time, so having a movie you can escape to, and that will make you laugh and get scared, is the way to do it,” Landon added. “So whether that’s on a big or small screen, I don’t think that part ultimately matters.”