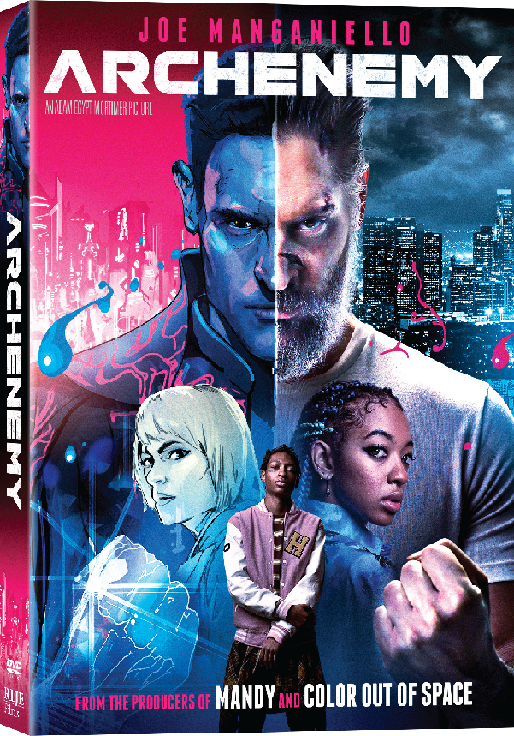 Sometimes it takes a driven and persistent young adult who’s determined to capture their own fame and celebrated triumphs to help an older, more experienced person realize that their supposed long-gone glory days don’t have to have disappeared for good. That’s certainly the case for Skylan Brooks and Joe Manganiello’s distinctive characters in the new superhero drama, ‘Archenemy.’ The two unique anti-heroes have their own particular unexplored dimensions that differentiate them from the typical protagonist in the superhero genre, but they still work well together to achieve their own forms of prestige.

The action movie was written and directed by genre scribe-helmer, Adam Egypt Mortimer. RLJE Films will distribute the thriller on Tuesday, February 16 on DVD and Blu-ray, for an SRP of $27.97 and $28.96, respectively. The disc release will include the bonus feature, ‘The Making of ‘Archenemy.’

In honor of ‘Archenemy’s disc release, ShockYa is offering two lucky winners a DVD of the feature. To enter, email us at ShockyaGiveaway@aol.com. Let us know that you’re entering to win the ‘Archenemy’ DVD giveaway in the email’s subject line, and include your mailing address in the message. You have until February 16, the day of the drama’s release, to enter, and you can enter the contest once daily. On February 16, we’ll pick the winners at random, and notify them through email. Good luck!

‘Archenemy’ follows Max Fist (Manganiello) as he claims to be a hero from another dimension who fell through time and space to Earth, where he has no powers. No one believes his stories except for local teen reporter, Hamster (Brooks). Together, they take to the streets to wipe out the local drug syndicate and its vicious crime boss known as The Manager, who Hamster’s sister, Indigo (Zolee Griggs), is working for as a drug dealer.