Many people struggle with personal existentialist crises when they’re faced with oversweeping cultural changes and society places overbearing expectations on them to make swift decisions about their futures. The three young protagonists in the comedy, ‘Pirates,’ which is set in 1999, not only have to face cultural changes as the world prepares for the new century, but also prepare for adulthood.

The British movie had its International Premiere in the Narrative Spotlight Screening Section at last month’s SXSW. The comedy is set to be released on Blu-ray, DVD and Digital in the filmmaker and performers’ native UK on May 16.

‘Pirates,’ which is set on New Year’s Eve, follows Kidda, Two Tonne and Cappo as they drive through London in their tiny Peugeot 205. The trio is having fun pumping a live garage set from the stereo and arguing about their Avirex jackets and Naf Naf imports. But as the 18-year olds are stepping into adulthood, they know their lives and friendships are on the brink of change. Determined to end the 20th century in the most memorable way possible, they drive around London in a desperate search for tickets for the best millennium party. In their efforts to end up somewhere, they end up closer together.

Yates, Elazouar, Peters and Edusah generously took the time the day after ‘Pirates’ had its International Premiere at SXSW to talk about penning, helming, producing and starring in the movie during an exclusive interview over the phone. Among other things, the filmmaker and actors discussed that Yates scribed the screenplay, and the performers were drawn to play their characters, because the overall plot and characters are personal in nature and relatable. Yates and the actors also expressed their gratitude that American audiences were able to connect with the British coming-of-age comedy during its SXSW screenings.

ShockYa (SY): Reggie, you wrote the script for the new comedy, ‘Pirates.’ What was the inspiration behind, and experience of, penning the screenplay?

Reggie Yates (RY): It was quite a quick process. This is my first feature film, so this is the only experience I’ve had with the process. But I’m constantly reminded by our producers that scripts never move as quickly from being written to shooting them on set as quickly as ‘Pirates’ did. So that’s an awesome experience.

Where we originally went from the screenplay to where we ended up with our cast really took what was in my head to another level. I’m really pleased with what turned out because the development process was quite quick.

But the shoot was massively delayed because of COVID. The entire cast and crew really loved the project, so we all came back to it with the same kind of energy. I think that’s why you can feel something nice happening on screen

SY: Speaking of the casting process, Elliott, Reda and Jordan, you play Cappo, Kidda and Two in the film. What was it about your characters, as well as the overall script, that convinced you to take on your roles? How did you become attached to star in the movie?

Reda Elazouar (RE): The characters and story just jumped off the page. They’re something you can really relate to, so we were really excited, and couldn’t wait, to bring the characters to life.

I think the acclamation of all of our characters coming together, and what we could all bring to the script from our personal lives, really just clicked. I think we had this feeling of being comfortable around each other from the audition and rehearsal processes that allowed us to be vulnerable and connect with each other on set, as well as lift the script off the paper. That’s what really made this project so special for all of us.

Jordan Peters (JP): Yes, it was a beautiful casting process. Casting processes can be tough because so many people are going after the roles. But when it came to the chemistry read, it was so nice because we had the chance to play different versions of these characters.

When Reda, Elliott and me found our connection, it was a beautiful moment. I think our chemistry is what makes the film so great.

Elliott Edusah (EE): Yes, it was definitely a testament to the rare way Reggie auditions actors. I had three auditions in total, and from the very first one, was allowed to improvise, which I was also allowed to do during the second one. By the third one, having two very talented actors with me in a room, and being able to improvise with them, allowed us to get the chemistry out there, and be comfortable together. That’s the beauty of having a very good casting process.

SY: Once you were all cast, what was the process like of working together to build the relationships between your characters?

EE: When we were cast, Reggie took us away to the east of England, and we had three days to speak to people of the times. For example, a lot of the DJs and emcees of the time let us know about the lingo and slang of the time and how to speak it, which I think is the most important thing I took away from it. That helped us create our characters because we were given so much information.

We also did our own research, as well. So we were able to create our characters from the ground up, and infuse what it means to be a young guy in London, and as well as a Londoner in general, into our roles.

SY: Further speaking about the improv, one of the main driving forces between the characters is the comedy and jokes they make during their journey. What was the process like of creating the humor during the production, especially through the improv?

RE: I think the humor in the film really started in the script. I think the script was hilarious before any of us came into the picture, but I think what we all did was bring our own life experiences to it.

But it was also important to Reggie that we stuck to the script for at least one take of each scene. But once we had that, Reggie allowed us to have free reign and bring ourselves to the script. That’s what gave us the comfortability to play with each other and take risks, and that was really exciting. Wouldn’t you all agree?

JP: Yes, I do. But it was also hard at times because when you’re making a comedy, you have to make all of your moments funny. There were moments where the crew was laughing…

EE: …But I think the best moments were when you guys were laughing.

JP: There were some scenes where I was laughing the whole time and couldn’t stop laughing. But those moments helped make the scenes.

SY: Also speaking of directing ‘Pirates,’ Reggie, how did you approach helming the project after you finished scribing the screenplay?

RY: It was amazing. I’ve only really been through the process going from script to screen as an actor before, and then directing shorts. It was an amazing shift from being an actor who worked with directors on set to creating something that was once a small idea in your head on set, surrounded by people who are surrounded by your vision. That made me feel massively grateful every day on set.

Even when I was sick on set, unknowingly with an early case of COVID, I was having the best time. I was having as good of a time as the cast. I feel very lucky that I was one of the filmmakers who not only had an idea, but also a script and was able to make it. I know that’s a rare thing.

SY: Reggie, besides writing and helming ‘Pirates,’ you served as an associate producer on the feature. Why did you decide to also produce the comedy, and how did you balance your producing and directorial duties throughout the production?

RY: The producing element for me was a bit of a weird one. I’m a producer on the film, but my role as a producer overlaps with my roles as a writer and director because I really care about the project. I wanted to make sure that the film was executed to the degree that I thought it deserved.

I continue to be involved with elements of the project that a producer should be handling, but that’s just an extension of what the director’s supposed to be doing. I don’t know any other way of working besides really working hard and trying to see out your vision as best as you can, regardless of the budget you have.

So the fact that fits into the realm of being a producer was cool, and I’ll take the credit. But as far as I’m concerned, working a producer is what you need to do when you have an idea and try to execute it.

SY: Throughout the plot, the friends drive through London in their tiny Peugeot 205 in a desperate search for tickets for the best millennium party. What was the experience like of creating the action sequences as the characters drive throughout London, and visit different locations?

RE:0 I think it was a great experience. Having to ride in the car to where we’re going throughout the whole film is interesting because the car is almost the fourth character. I think the scenes in the car were very different than the scenes on locations – do you guys agree?

JP: I definitely agree. The car was where our characters were able to be themselves. Also, being able to drive around the city that I grew up in was amazing. We were driving past roads that I walked down to go to auditions. So it was nice to see London while we were filming.

SY: ‘Pirates’ (had) its International Premiere in the Narrative Spotlight section at this year’s SXSW. What does it mean to you that the film (played) at the festival?

EE: It’s brilliant. I didn’t know if a U.S. audience would be able to appreciate this type of movie from London. But when we had our International Premiere on (March) 11, it was amazing to see so many Americans of all ages enjoy the film. They may not have been able to understand all of the nuances, but for them, it was a coming-of-age movie from the other side of the pond. I think that really resonated with them.

To have our film travel to SXSW, which is one of the biggest film festivals in the U.S., is amazing. People’s reactions were great, and being in the cinema with them was really a joy. I hope more people in the U.S. get to see ‘Pirates.’ 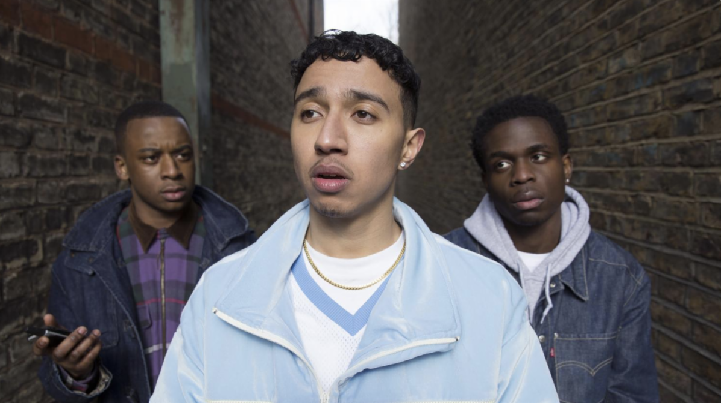