Many people who have found success as adults in spite of their traumatic upbringing wish they could have the chance to relive their childhood in order to secure the true happiness they have longingly desired. Actor Hiram Delgado’s protagonist of Eduardo in the new short film, ‘Homesick,’ has been given a second chance by a retreat to reconnect with his childhood and adolescence, in order to secure that contentedness. But his journey into the past ultimately doesn’t turn out the way he initially planned or expected.

The thriller was written and directed by Will Seefried, and shot by cinematographer Cory Fraiman-Lott. ‘Homesick’ had its world premiere in the Narrative Shorts Competition Presented By IMDbPro at this past March’s SXSW

Fraiman-Lott generously took the time during SXSW to talk about serving as the cinematographer on ‘Homesick’ during an exclusive interview over the phone. Among other things, the filmmaker discussed that he was drawn in part to serve as the cinematographer on the movie because he appreciated that, Seefried was receptive to his ideas, and they were interested in the same visual references. Fraiman-Lott also mentioned that he was excited to be able to attend, and reunite with Seefried and the rest of the crew and cast at, the drama’s world premiere at SXSW in person.

The conversation began with Fraiman-Lott explaining how he became involved serving as the cinematographer on ‘Homesick.’ “It was a pretty quick process, compared to a lot of projects. Will Seefried, who’s the director, and Hannes Otto, who’s his partner and the producer on the film, reached out to me out of the blue. We have a mutual friend who recommended me,” he said.

“So we did a quick Zoom interview, and I think they had just written the script about a month beforehand. Production was only a few weeks out from our initial meeting, so it was all a bit of a expedited timeline, which was a bit daunting,” the filmmaker admitted.

“But we had a really good initial interview, and we hit it off. They seemed receptive to some of my initial ideas. We also seemed to be interested in the same visual references, so it seemed like a good fit,” Fraiman-Lott added.

Further speaking of working with Seefried as the short’s writer-director, Fraiman-Lott shared what what their collaboration was like to decide how they would visually tell the story on screen. “It was interesting; Will’s background is as an actor, and lately, he’s been doing a lot of writing, as well. But this was his first attempt at being being behind the camera and directing. So it was interesting to see how he approached it,” he divulged.

“For being technically less experienced, he spent so much time on the prep, which was really useful, particularly with our short time line. He drew up these beautiful storyboards. During the post process, he also put together this really elaborate board to put all of our color references in one place,” the cinematographer also shared. “So I was impressed that even though he was a bit out of his element, he seemed to so easily navigate that world.

“Another big part of that was that he was really trusting of me and also the production designer, Cheyenne Ford. It was a really cool thing to have him see that we were on the same page, especially since we hadn’t worked together before. We gravitated towards the same references, so that allowed us to do our own thing for a bit,” Fraiman-Lott continued.

“Then on set, it really was a dream. I was talking to them over the weekend (before the interview) about how we executed (the film) without too much indecision; a lot of the work had been done in the short prep timeline. So the actual day, we were able to shoot it pretty quickly,” the filmmaker added.

Further speaking about working with Ford and Seefried on the production design for the house ‘Homesick’ is set in, and shooting the film on location in general, Fraiman-Lott shared how he approached setting up the cameras and capturing the action. “Cheyenne is a good friend, and she and I had worked together a bunch of times before. Part of the reason why she’s so incredible is that she puts a ton of work into the prep process,” he revealed.

“So she created this production Bible that the three of us could all contribute to. There were storyboards and some of my visual references,” the cinematographer continued. “We had a lot of images for the short created ahead of time, but because of our short schedule, it wasn’t until a few days before (the shoot) that we were really able to dig in and see what was working.

“For the most part, we didn’t have to divert too much, but there were some compromises, which we had to navigate quickly. But having such an involved prep process really helped the three of us see what was and wasn’t working, and then make the changes we needed,” Fraiman-Lott also noted.

The filmmaker also admitted that shooting ‘Homesick’ “wasn’t always easy from a lighting standpoint, “especially having three actors in a scene, but we made it work. It was also challenging because there were low ceilings, which isn’t easy for lighting. But we were able to use units lower to the ground and push through the windows, and that made it work okay.”

Further speaking of lighting the house, Fraiman-Lott divulged that “We really dissected the film into two sections: when the main character, Eduardo, is getting ready to go through this more surreal experience, and then when he was actually in the experience. It was important for us to differentiate (those experiences) through the camera movement and framing, as well as the lighting.

“We wanted the moments that he’s in the experience to be idyllic and naturalistic. So we focused on that feeling a lot warmer, natural and more romantic,” the cinematographer shared. “Then the contrast to that, for the bookends of the piece, the lighting is intentionally a little bit more sickly, and we framed the story to the actual experience.”

Fraiman-Lott then delved into what the process was like of collaborating with the actors in deciding how he would capture their movements while shooting the thriller. “Our actors were all so talented. Our lead (Delgado) had this incredible look, where he was able to feel, on one end, very adult. He had this sadness, but there was also an innocence and youthfulness when we put him in his pajama wardrobe while he was actually going through this experience. He really channeled this youthfulness, but it was really great that he was able to navigate through both,” he divulged.

“But it was a lot of fun. A lot of the visual approach in that section was to keep our point-of-view pretty subjective. It really felt like we were going through this experience with Eduardo…We really wanted to inhabit his point-of-view, so we used these low angles that felt more real,” the filmmaker continued.

“With Leslie (Fray), who played the mom, we wanted her to look into, and hold, the camera as if she were holding Eduardo. So there were instances when we blended our point-of-view with Eduardo’s point-of-view, so that it would feel as though we were immersed in this experience with him,” Fraiman-Lott added.

Throughout ‘Homesick,’ the camera movement evolve, shifting from static, stifled compositions and developing into a loose handheld. The cinematographer then delved into why he and Seefried decided to include the shifting camera styles and movements.

“In looking into how we wanted to differentiate the framing of the story and the experience itself, I felt that a change of aspect ratio would be a fun way to make that contrast even more stark. Beyond that, we also looked into how the camera movement could be different. So we used the opening and final scenes as a way to keep the camera much more formal, and pretty much always locked off on a tripod,” Fraiman-Lott divulged.

“Then as we move into the other sequences, and are sort of reliving (Eduardo’s) childhood, we let the aspect ratio widen out a little bit, and opened up the view a little bit. We shot those sequences handheld, messy and much more spontaneous as we followed the action,” the filmmaker also noted.

“I think that really helped with the nostalgic quality of the sequences. A reference for that was ‘We the Animals,’ which had a really loose composition. It also has camera placements that were really low to the ground, as well as more subjective point-of-views that really helped harness that feeling of childhood. So that was an important shift in that middle section,” Fraiman-Lott added.

After production on ‘Homesick’ was completed, the cinematographer embraced the experience of bringing the short to SXSW to have its world premiere. He described the experience as being “so surreal. For me, SXSW getting cancelled back in 2020 felt like the first shift into COVID becoming a really serious and major event.

“So now two years later, being able to come back and have the festival in person, and have it be one of the first festivals back in person, is really exciting,” Fraiman-Lott continued. “It’s great to be able to commune with our crew, who I haven’t been able to see too much since we shot the movie.

“Also being able to meet other filmmakers has been great. I felt that our (shorts) block in particular had some really strong films which had a throughline of surrealistic, high concept, absurdist narratives. So being able to hang out, and talk, with those filmmakers (over the weekend of the premiere) has been a fun part of it,” the cinematographer concluded. 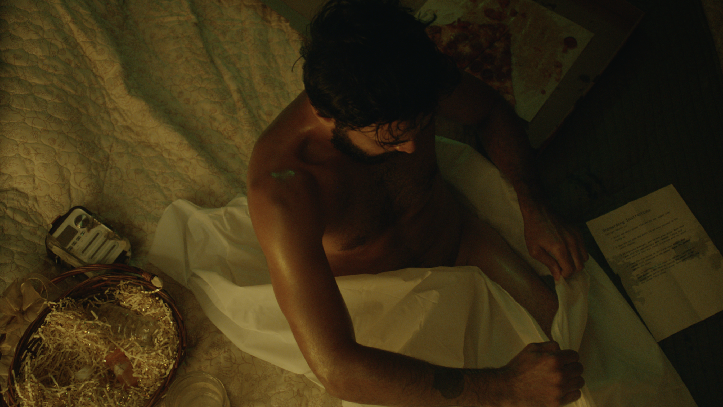