Psychobilly-rockability musician Mojo Nixon has long been unparalleled in his rebellious fight against society’s biggest hypocrisies, particularly the corporatism ideology that has driven American culture since he initially rose to fame in the 1980s. The Southern rocker has long embraced the American right to freedom of speech in order to add authenticity to his songs that reflect on socially diverse ideas many people are to afraid to publicly discuss on their own. The singer’s socially daring career choices are reflected in the new documentary about his life, ‘The Mojo Manifesto: The Life and Times of Mojo Nixon.’

The film had its World Premiere this past March in the 24 Beats Per Second category of the Austin-based festival, SXSW. The movie was directed and edited by first-time feature filmmaker, Matt Eskey. The filmmaker also serves as the bass player for the singer’s band, Mojo Nixon & The Toadliquors, for 20 years, starting in 1993.

‘The Mojo Manifesto’ tells the story of the legendary eponymous cult musician and his rise to fame during the golden years of MTV. In part through archival footage from throughout his career, the documentary chronicles Nixon’s life as a musician, particularly as he spawned a rabid cult following that has stuck by him throughout his successes and controversies. The movie also reflects on the singer’s career through interviews with such fellow musicians and entertainers as Jim Dickinson, Country Dick Montana, Todd Snider, Steve Poltz, Eric “Roscoe” Ambel, Bill Davis, John Doe, Luther Dickinson and Winona Rider.

Born Neill Kirby McMillan Jr., the singer grew up in Danville, Virgina, listening to records from his father’s soul radio station and plotting his escape from the confines of conservative small town life. On a bicycle trip across the country, McMillan experienced The Mojo Revelation, and as a result, took on the persona of Mojo Nixon, a primitive blues-inspired musician.

Nixon then teamed up with the enigmatic Skid Roper to form an outrageous duo. Relentless touring, a record deal, college radio airplay and MTV exposure then led to unexpected mainstream success. The musician’s 1987 song, ‘Elvis Is Everywhere,’ became a cult phenomenon, but his next single, ‘Debbie Gibson is Pregnant with My Two-Headed Love Child,’ was banned by MTV. As a result, Nixon faced a decision that could jeopardize his career.

Nixon generously took the time during this year’s SXSW to talk about appearing in ‘The Mojo Manifesto’ during an exclusive interview. Among other things, the singer discussed that he became interested in chronicling his life in a documentary after Eskey approached him with the idea, and suggested they include the footage he had from his career in the feature. Nixon also shared that he’s honored that the film had its world premiere screening during the festival in his hometown, as Austin is the community where most of his current fans live.

The conversation began with the singer explaining why he was interested in making a documentary that tells the story of his rise to fame and subsequent career as a legendary cult musician. “It was the idea of my bass player, Matt Eskey. He knew me because he was in the band for 20 years. He also saw me in another documentary, and thought I was great in it,” he revealed.

“He also knew that I had a box full of tapes from the ’80s and ’90s when we did a million different live shows and stuff on MTV. We also did movies and tours, so there was a lot of footage of me in my heyday, causing trouble. So he thought that maybe we could make a documentary out of all of that,” Nixon also shared.

Further speaking of Eskey, Nixon delved into what his experience was like of collaborating with his fellow musician as the director and editor of ‘The Mojo Manifesto.’ “I told him that I had three requirements – that it should be funny, short and make the fans happy. I also told him, ‘Don’t try to make civilians try to understand or love Mojo.’ I didn’t see the film until it was done, and…I thought he made really good decisions on it,” he divulged.

“When you’re in a bad and there are four guys, it’s not about the two hours you’re on stage together; it’s the 22 hours when you’re off stage that allows you to really get to know somebody. I really got to know Matt as a musician and overall person when we weren’t on stage together,” the singer noted. “So after getting to know him as a person that way, I realized I would also like the way he would work as a filmmaker when we first reunited to make the documentary.”

Nixon then shared what the process was like of deciding who the crew would interview for ‘The Mojo Manifesto,’ and what topics they would discuss. “He had an idea of the obvious list of people who were in the Mojo orbit; there was my family and friends from high school. There were also the people from San Diego, where I started out as a musician,” he shared.

“Skid Roper, my old musical partner, was the only one who didn’t want to be in the film. We made our first four albums together,” the musician continued.

“Later on, we also spoke to my contemporaries, including Steve Poltz and Jello Biafra, who I made an album with, as well as Todd Snider. These were my fellow weirdos, and I made sure they were all included!,” Nixon added with a laugh.

Besides deciding which of his fellow musicians would be interviewed for , the movie, Nixon also shared what the process was like of choosing which of his songs should also be included in the feature. “Matt used about 25 of my songs. But my piano player noticed (during the film’s world premiere at SXSW) that ‘Louisiana Liplock,’ which is one of my biggest hit (songs), isn’t in the movie. But if you’re looking for all of the rest of my biggest hits to be in the film, they’re all there.”

The singer then shared his excitement over ‘The Mojo Manifesto’ having it’s world premiere in his hometown of Austin during this year’s SXSW. “It was initially supposed to happen two years ago. But then the pandemic hit right before the festival was scheduled to begin, so it was cancelled,” he revealed.

“But we’re so happy to have it play here in Austin – it needed to play here. This is a place where people really know me; if it was at Sundance, Tribeca or Toronto, there’d be a lot lest Mojo interest,” Nixon continued.

“I think I played at the second SXSW, back in 1988, and then gave an invocation speech the following year, at the third SXSW. We also did a bunch of shows here at SXSW throughout the years, including when I made the albums with Jello, and the line was out the door. So this is the place where we should definitely be showing the movie, and it all worked out really great.” 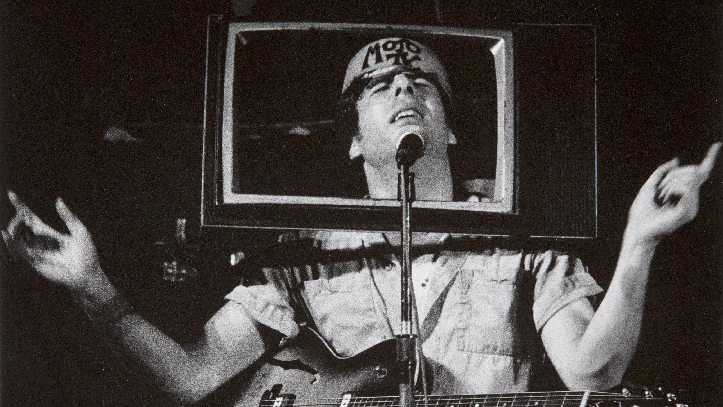