Leaving small, declining towns for the promises that the big cities have to offer is a seemingly encouraging life goal for many members of upcoming generations. But once they achieve that dream, the young adults can also start accruing guilt for leaving their aging parents and relatives behind, and neglecting to maintain their bond. Up-and-coming Japanese-Australian writer-director, Natalie Erika James, powerfully and emotionally reflected on her own personal experience with her family in her new horror movie, ‘Relic.’

As an adult, James long contemplated returning to the rural Japanese town where her grandmother lives, which is where the filmmaker went to primary school, and spent many of her summer vacations. When she ultimately decided take the trip back to Japan to see her grandmother, who suffers from Alzheimer’s, she heartbreakingly realized she was too late, as her grandmother didn’t recognize who she was. The helmer admitted that the guilt was difficult to accept, as she had to watch her beloved relative progressively lose parts of herself.

The drama marks the feature film directorial debut of James, who also co-wrote the script with Christian White. The movie was produced in part by Jake Gyllenhaal and MCU filmmakers, Joe Russo and Anthony Russo. ‘Relic‘ is now playing On Demand, VOD and Digital, courtesy of IFC Midnight, after it had its World Premiere at this year’s Sundance Film Festival to critical acclaim

‘Relic‘ follows an elderly woman, Edna (Robyn Nevin), as she inexplicably vanishes, which leaves her daughter, Kay (Emily Mortimer), and granddaughter, Sam (Bella Heathcote), to try to find her. The duo rush to their family’s decaying country home, where they find clues of her increasing dementia scattered around the house.

After Edna then returns just as mysteriously as she disappeared, Kay’s concern that her mother seems unwilling or unable to say where she’s been clashes with Sam’s unabashed enthusiasm to have her grandma back. As Edna’s behavior turns increasingly volatile, both Kay and Sam begin to sense that an insidious presence in the house might be taking control of her. All three generations of women are brought together through trauma and a powerful sense of loyalty to face their ultimate fear together.

James, Mortimer, Heathcote and Nevin generously took the time recently to talk about co-writing, directing and starring in ‘Relic’ during a roundtable Zoom interview. Among other things, the filmmaker and actresses discussed that they liked that the script was subtle in its exploration of the generational divide between the three female relatives, including the fact that no matter much people love their relatives, they can still also feel a lot of pain, regret and confusion towards each other. They also shared their appreciation over being able to work with so many fellow women, both in front of, and behind, the camera during the production of the female-driven drama.

The conversation began with the actresses discussing what drew them to play their respective roles in the movie, as well as what the experience of exploring the generational divide between the women, including how they dealt with grief and stress, was like. Heathcote began by sharing that “The script grabbed me; I just thought it was great. It’s rare that you read a horror script like this, where you’re emotionally invested. I didn’t want to put it down.

“I think as far as the generational divide goes, I find that often times, it’s easier to be friendly with your grandparents than it is with your parents,” the performer admitted. Parents are “the ones that did the disciplining and set the boundaries, and I loved how that was present in the script. I felt like I was really on Robyn’s side, and I was willfully misunderstanding (Kay’s) intentions. It added fuel to the fire of whatever complexity was between us, and I loved that. I also loved that the relationships were really difficult.”

Mortimer then chimed in, and agreed with the actress who played her daughter on screen. “I felt that the feeling of going home to be with your parents was so recognizable and truthful. The story shows how going home makes you feel both full of love and safe, while also feeling full of all sorts of confused and strange emotions.

“I just felt like Natalie’s script was really good in a very subtle way, where it wasn’t banging these ideas over your head,” Mortimer continued. “It was very delicately done. It shows the complications of being somebody’s daughter and somebody else’s mother, and no matter much you love them, you can also feel a lot of pain, regret and confusion in their midst. That felt really right.”

Nevin also concurred with the two women who played her descendants in the drama. “It was the script that appealed to me quite powerfully when I read it. I’m a mother and a grandmother. It’s certainly not my story, but I recognize so many elements in it. I just instinctively understood it. There was much that was unsaid that I just understood and knew to be there.

“Generational divide is something I also understood because I’m living it. It also took me back to my own mother, who died about 13 years ago,” the performer shared. “I’m now feeling the guilt from that relationship that I might have felt then, had I allowed it to be present when she was still alive.

“That all adds to the complexity of the work that you make. If you have all of that inside you, including that level of understanding, pain and sadness, which are all so relevant, that all feeds into the work,” Nevin added.

Besides the the generational divide between the three main characters, another striking element of ‘Relic’ is its original, daringly unpredictable ending. James revealed that “The ending was originally different in its first form, as even the characters and the story were slightly different. There was a husband character for Kay,” she admitted.

But “the sentiment was always the same, and it always ended on a note of connection and a horrific examination of aging and dementia,” the scribe revealed. “In terms of what you actually see on screen, the idea came for it early mid-development. We had it in there for quite a while. It wasn’t a last minute change, but the sentiment of that ending has always been there from the start.”

**SPOILER ALERT** During “the last note, Sam discovers a bruise on Kay’s back,” James also divulged. “We also had a version where Kay discovers a bruise on herself. I personally felt it was stronger that it was Sam’s discovery, because it lends itself more to the cyclical nature of things. In a way, Kay’s journey had come to an end, in terms of accepting what was happening, and the state that she was in. So it made sense to me to shift focus to Sam and the next generation.” **END SPOILER ALERT**

Heathcote the chimed in about Sam’s journey, stating that “It’s funny when you sit and talk about personal stories. I don’t know how else to talk about grief without referencing personal stories, because I feel like it’s so personal. I suppose the same goes for any heartbreak,” she noted.

“That’s one of the things I loved about this film and the last scene. The idea of coming to terms with mortality, as well as losing the people you love and the fear of hereditary diseases, is so tender and loving,” the actress continued. “I get emotional just thinking about that scene.”

“I didn’t see that scene until I saw the movie at Sundance and it was very, very effective,” Nevin then revealed. “For the entire movie, I was sitting there, thinking, ‘Maybe we could have done that a little bit better, Robyn.’

“But then in the scene where (Kay’s) carrying her mother up the stairs, that’s when I started to think that the action within the ending was just so extraordinary. I don’t know what kind of imagination that comes from, but it was profoundly affecting, and I didn’t even quite understand why. It was something I had to think about in retrospect,” the performer added.

Mortimer also agreed with her co-star and director’s sentiment. “From the moment I read that scene, to being in it and then watching it, it was the same feeling for me, in that this is something that I could never have imagined. This notion is so wild and out there,” she proclaimed.

“Yet it feels so familiar. That was what was so extraordinary about it-it felt so right. It felt like the right depiction of the feeling of helping someone who you love die, or cast off their mortal coil, and how horrifying and difficult that process is,” the actress added. “(Y)et, it’s also about how beautiful it ultimately is, in a weird and strange way. I’m still staggered by it.”

Since the drama deals with several heavy issues, the filmmaker and performers felt that they learned thing about themselves during the production. James not that she thinks “you always learn things about yourself through your writing. A lot of the times you write intuitively, and then you look back and think, ‘Wow, I didn’t realize that was an issue,'” the scribe admitted. “It’s very illuminating, and it’s even more illuminating when you read stuff that people have written about your work. They look at it in a way that you never would have considered. So yes, I’ve learned a lot about myself.”

Heathcote then chimed in, and admitted that “I don’t know if I learned anything about myself, because I feel like my grief is very close to the surface, and it was wonderful to be able to explore that in the film. I remember talking to my therapist at the time, and said, ‘Well, I have to do this stuff at work,’ and she was like, ‘Well, what else are you going to do with it? This way, you can use it.’

The actress also revealed that she realized that “dying is probably my predominant fear, which is strange, given that everyone is going to die at some point. But it’s certainly something that’s very present in my mind.” She added that “losing someone to hereditary disease or perhaps falling ill to it myself, is definitely something that I think about, and I’ve thought about a lot since making this film.”

Nevin then shared that she thinks starring in ‘Relic’ “illuminated my relationship with my daughter for me, and also my deceased mother, which was useful. Interestingly, being the oldest person involved with the film, as I’m 78, the idea of imminent death didn’t affect me at all. I didn’t have any sense of my own mortality through filming.”

The movie also brought up “so many things for me,” Mortimer also confessed. “It made you think about so many things, including death, people’s relationships with their mother and daughter.”

The performer also expressed her appreciation over being able to work with so many fellow women, both in front of, and behind, the camera during the movie’s production. “One of the things that really happened on the set was just a feeling of just how cool women are, and that I’ve never had an experience of just working with three other women. I just loved that experience; it really did feel different, and it really was cool,” she proclaimed. “It was really exciting in a way that I hadn’t ever known before.” 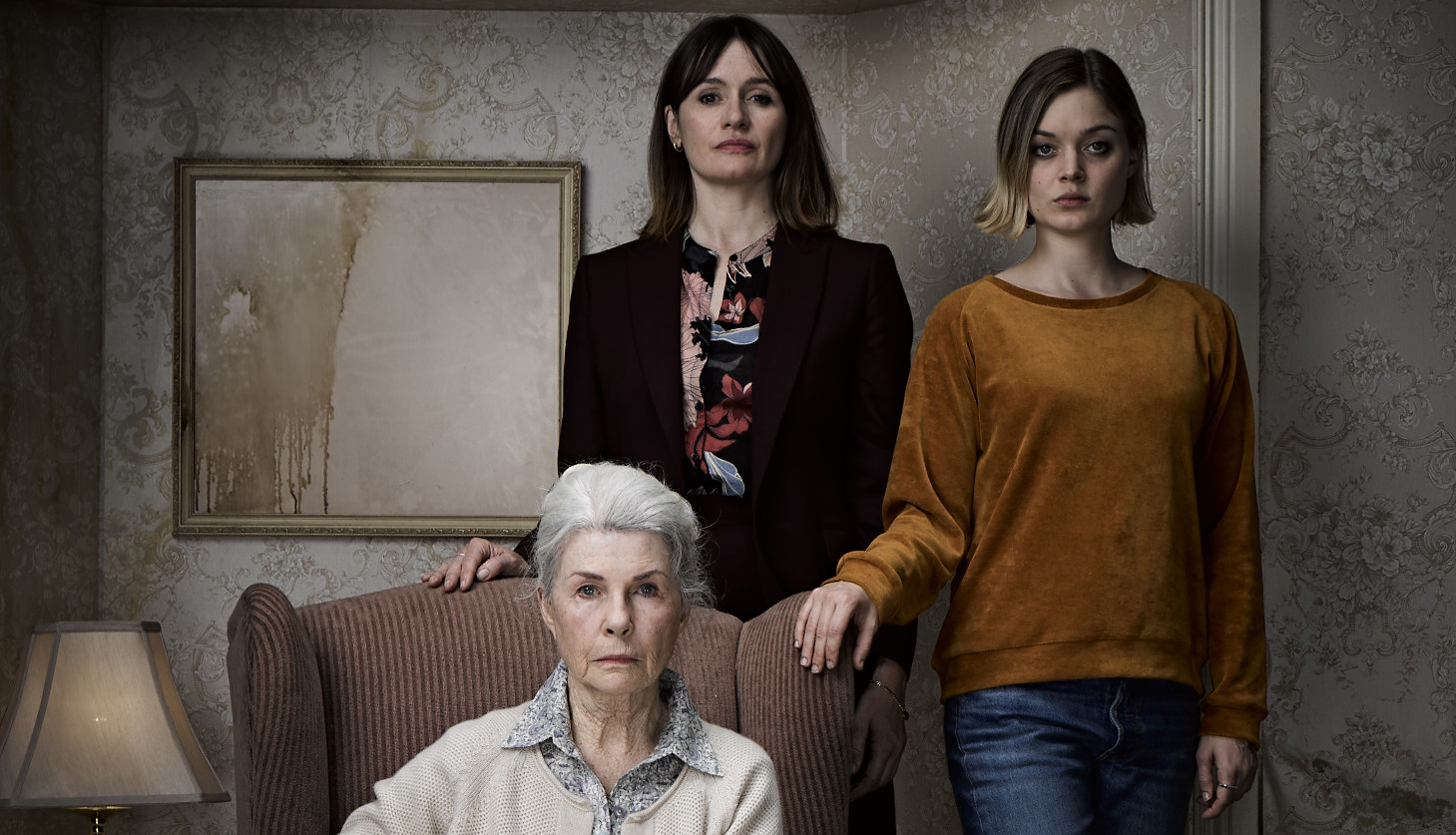