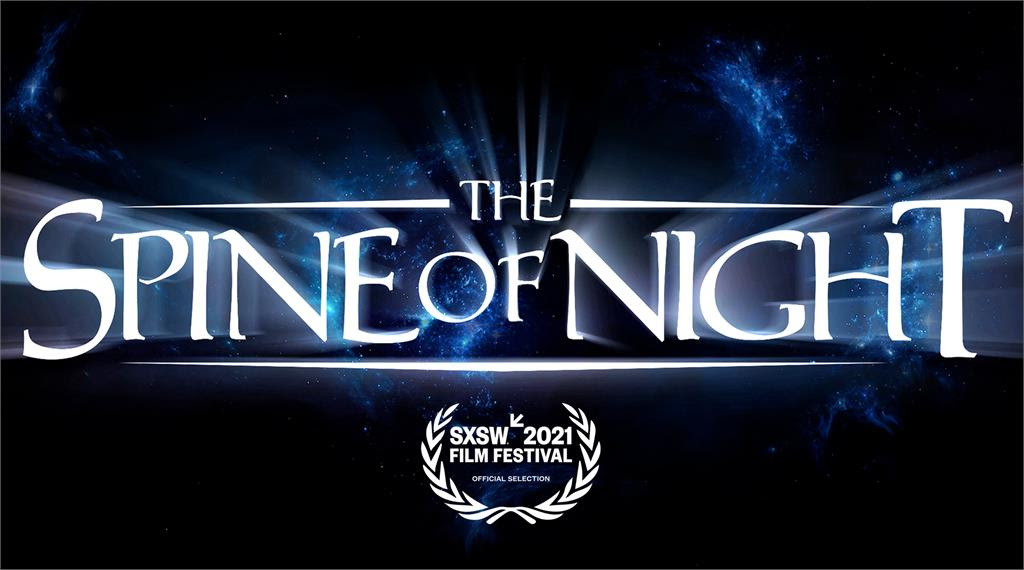 The best way the world can survive during an age of ruin is for all of mankind to unite and fight back against their common foe. That’s even true for heroes who come from different generations and cultures who are living in a fantasy land that’s fueled by magic, and are being attacked by a dark force. That’s certainly the case for the diverse characters of the new ensemble epic fantasy film, ‘The Spine of Night.’

The hand-rotoscoped animated movie was inspired by the cult classic works of animators Ralph Bakshi and Frank Franzetta. Filmmakers Philip Gelatt and Morgan Galen King co-wrote and directed ‘The Spine of Night,’ and the former also served as a producer. The drama, which features the voices of such actors and actresses as Richard E. Grant, Lucy Lawless, Patton Oswalt, Betty Gabriel, Joe Manganiello and Larry Fessenden, had its World Premiere last week during SXSW.

Set many years ago, ‘The Spine of Night follows an ambitious young man as he steals forbidden knowledge from a sacred plant. As he subsequently falls to its darker temptations, he inadvertently unleashes ages of suffering onto mankind. As his power grows over the years, there are many people who try to stop him. Among them are a daring tomb-robber, star-crossed lovers, a maniacal necromancer, winged assassins and an undying guardian.

Gelatt and King generously took the time during SXSW to talk about writing and directing ‘The Spine of Night’ during an exclusive interview over Zoom. Among other things, the filmmakers discussed why they decided to pen the script for, and helm, the movie together, which they described as the most fun development processes that they’ve ever had. They also mentioned that during the casting process, they sent the screenplay to actors and actresses who they felt would be attracted to this type of fantasy and horror-driven story. The filmmaking duo also mentioned that they were excited to be able to premiere the drama virtually during SXSW.

ShockYa (SY): Together, you co-wrote the screenplay for the upcoming animated fantasy film, ‘The Spring of Night.’ What was the inspiration in penning the screenplay, and what was the process like of creating the story together for the horror movie?

Morgan Galen King (MGK): I made a couple of short films while I was teaching myself the process of rotoscoping that’s seen in Ralph Bakshi’s work. In the course of that experience, I started carving out a fantasy setting. After my (2013 animated fantasy) short ‘Exordium’ came out, Phil saw it and then reached out to me. We then started diving into what more we can do with that world, and kicking around ideas. It then become this wonderful thing.

Philip Gelatt (PG): When I saw the short film, I immediately loved it because it was so evocative of the fantasy novel genres of the late 1970s and early ’80s. So when I got in touch with Morgan, like he said, the question was, how do we develop this, and what kind of thematic things can we do with this world? It was one of the more organic and fun development processes that I’ve had, and it worked out well.

SY: In addition to scribing the script, you also directed the drama together. How did working on the screenplay influence your helming style? How would you describe your overall directorial style?

PG: It was great, as was the script writing process. Since we made the film in an old school, rotoscoped style, we shot live action, motion sensor actors first. To do that, we rented a warehouse and brought people in and put them in these weird outfits so that it was easier to animate over them. I bring that up because when I reference on set, I mean that warehouse.

It was very collaborative. Sometimes Morgan would take the lead, and sometimes I would take the lead, but there was always a general discussion about whether we had what we thought we needed. Morgan was much more into the animation process than I was, so most of our discussions were about the malleability of the footage that we had, and how much we were able to change in order to suit what he started drawing.

Once we were done with the on-set portion of the production, it became much more of Morgan’s world. But he would run things by me once he got into the drawing. We also had a lot of discussions in the editing process. Overall, it was a pretty happy collaboration.

MGK: It was a dream collaboration. I’ve spent my whole life trying to find creative partners who I felt I could bounce ideas off of during the production. Our collaboration forced me to rise to the challenges of the project in a way that was creatively rewarding. It was a fantastic experience for me.

SY: ‘The Spine of Night’ features a diverse ensemble cast, including Joe Manganiello, Patton Oswalt, Lucy Lawless and Betty Gabriel. What was the casting process like for the film?

PG: Once we were pretty deep in the animation process, we started looking around to figure out what bigger voice talent we could bring in for the project. We started with the blanket question of about which actors we thought would be into this kind of thing.

The first person who came to mind was Joe Manganiello because he’s so active in D&D and the nerd world, which I mean in the best possible way! (Gelatt aughs.) So he was the first person we approached.

That question also applied to everyone else, including Patton Oswalt, who has sort of a nerd vibe to him, as well. Lucy Lawless doesn’t, but she’s just fantastic in general. Her genre credentials are so amazing. I feel very lucky that we had gotten all of them, to be honest; they were all fantastic and fun to work with on the project.

MGK: Working with Betty Gabriel was also fun. She was in this film even before ‘Get Out,’ so she carried through from the very initial days in the warehouse.

SY: Once the actors were cast, what was the experience like of working with them to build their characters?

PG: Bringing the actors on was a weird process because we started doing the voice casting before COVID, and we finished it after COVID started. So I’ve never met most of the bigger voice actors in person; I’ve only spoken to them remotely. It was fun, but different, as we’re not used to working that way.

But they read the script and knew what their parts were. So the tricky thing for them was that they were doing a voice that was matched to a motion reference performance, but I think they all did it very well.

They could modulate the emotionality of the performance, but the timing of what they were saying was not super valuable. So a lot of what we did was hone in on their performance in the emotional sense, and then run it a bunch of times until the two started to mold into one.

But it was all very fun, and they were game. It was a weird thing to ask an actor to come in and say, ‘You have to do these lines and bring yourself to them, but we can’t do a ton about the timing of them.’ But they all immediately understood who their characters were, which was pretty great.

SY: ‘The Spring of Night’ (played) during the Midnighters section at this year’s SXSW. What has the experience been like of bringing the movie to the festival?

PG: It’s been great. I’m very excited about SXSW, but sad that it’s not in person. I’ve never been to Austin, and it would have been nice to have an excuse to go.

I’m excited to get to premiere the film in this relatively unique way. There were virtual festivals at the end of last year, but this is a new, interesting way to do this.

Cancel reply
Lady Jane Persuades Lovejoy to Act as the Driver For an Old Friend on Lovejoy
Video Interview: Ilya Naishuller Talks Nobody (Exclusive)
To Top