Sophie and The Baron Trailer from Alexandria Jackson on Vimeo. 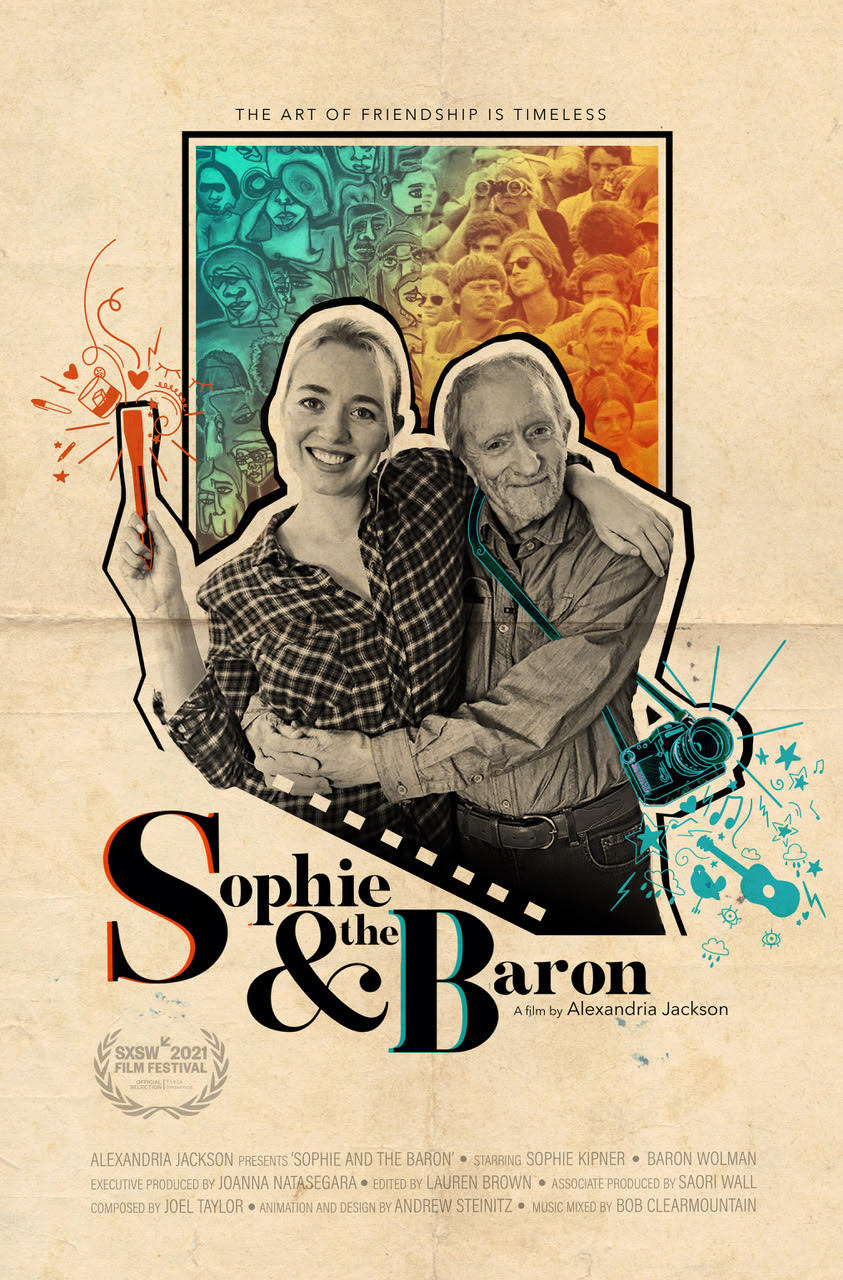 The poster for director Alexandria Jackson’s short documentary, ‘Sophie and the Baron.’

Chronicling the strong bond and admiration between friends and artistic collaborators in several mediums is a powerful journey that engages audiences on both visual and emotional levels. Filmmaker Alexandria Jackson is recounting the sentimental bond between her cousin, painter Sophie Kipner, and famed photographer, Baron Wolman, in the new short documentary, ‘Sophie and the Baron.’

Jackson directed, produced and shot the movie, which had its World Premiere in the Documentary Shorts Competition during SXSW earlier this month. ‘Sophie and the Baron’ garnered attention during the festival as it highlights Kipner’s process of reimaging Wolman’s legendary photos of Woodstock, Johnny Cash, Jimi Hendrix and Jerry Garcia with her signature blind contouring.

‘Sophie and the Baron’ follows the unlikely friendship between Wolman, who garnered attention throughout his career for working as a Rolling Stone Magazine photographer, at the end of his life and Kipner, an up-and-coming contemporary visual artist at the beginning of hers. The movie takes viewers on an uplifting journey into an artistic collaboration that transcended eras and mediums.

Jackson and Kipner generously took the time during SXSW earlier this month to talk about directing, producing, shooting and appearing in ‘Sophie and the Baron’ during an exclusive interview over Zoom. Among other things, the filmmakers discussed that they decided to make the short after Kipner met Wolman in a bar and became friends as they bonded over their art, which Jackson wanted to document in a movie. The duo also shared their appreciation that the film premiered during this year’s virtual edition of SXSW, and they were able to share Kipner and Wolman’s professional and personal relationship on screen with the world.

The conversation began with Jackson and Kipner explaining what inspired them to make ‘Sophie and the Baron.’ “Well, Sophie is my cousin. She met Baron Wolman, the incredible and iconic photographer, in London, when she was working at an artistic bar, where a lot of photographers and artists worked. He walked in, and she made fast friends with him,” Jackson revealed.

“It started with a good drink-that always helps!,” Kipner chimed in. “We became friends, and then I moved back here (to the U.S.). I then reached back out to him, as I was starting out on a new series of contour paintings. I asked him if I could reinterpret some of his photos that I had been inspired by for so long.

“Alex and I grew up loving these photos. Alex is a photographer, as well as a filmmaker, and always had that love of photography, so I couldn’t wait for her to meet him,” the artist added.

“She then introduced me to him, and I couldn’t help but to document this process. I clearly saw how kind and caring Baron was; he sadly passed away” since production on the film ended,” Jackson divulged.

“There was such an amazing opportunity to show the relationship between this up-and-coming young artist and this brilliant, prolific photographer unfold, and how he was so happy for her to reinterpret his work. It was a really cool thing to see, because it was an unlikely, but equally deep and beautiful, friendship. So I had to capture it,” the filmmaker added.

Being able to direct the short was an experience that Jackson cherished throughout the production. “It actually took a long time; we worked on this for over three years. It was incredibly organic; we didn’t think it would develop into a film. We just thought it would be fun to capture what was happening,” she revealed.

“But the project evolved, and showcased this beautiful friendship in which one artist was encouraging and validating another artist. The film shows Sophie’s work breathing new work into Baron’s work, which is really cool,” the filmmaker continued. “Baron was really involved in the process. He loved watching the edits and giving feedback.”

“He was involved in every cut, and was so excited,” Kipner also chimed in. She added, “I don’t think the movie would have turned into what it is without Alex being the one who made it. She knows me so well that it was so easy for us to work with each other, and not feel as though there was someone with a camera near you.”

Further speaking of the camera work, Jackson shared what her experience of also serving as the cinematographer on ‘Sophie and the Baron’ was like. “It’s interesting because the way that Sophie draws is that she does her initial blind contouring by not looking at the canvas; she just looks at the subject,” she shared.

“So she basically divorces her visual sense from her active drawing, which is very much like how a photojournalist shoots. There’s not much time for conscious composition; they’re just very in the moment, and it’s very organic. That’s how Baron worked, and very much how I shot this film,” the cinematographer revealed. “All three of us were doing versions of the same thing. We didn’t set up shots; everything was very organic.”

“She’s so amazing; she did the audio set up the lights, and had everything going on,” Kipner added as she praised her cousin.

The duo then delved into what the process of deciding which of Kipner’s reimagined paintings of Wolman’s photographs they would include in the documentary. “He had so many amazing photos to be inspired by, so choosing them was difficult,” the painter admitted. “But I just went by my gut, just like we did for the whole project, and went by what’s right. I’ve been inspired by his work for such a long time that I had photos that I was already looking at way before I met him.”

“Then when I met him, I thought, this is amazing!,” Kipner exclaimed. “Then the Woodstock piece felt like the obvious one to start with because it’s one of the coolest ones.”

Jackson then interjected to further discuss Wolman’s photo from the noteworthy music festival. “I don’t know if you know what we’re talking about, but one of his famous shots from Woodstock has a guy named Moonfire holding up a sign that says, ‘Love your animal friends, don’t eat them,’ and also has hundreds of faces in it. Baron was blown away that you were brave enough to take that one on in blind contour,” she said, turning to her cousin.

“I love working large, and it was such a big canvas that you’re able to get in and feel like you’re in the crowd. That photo puts you in that scene in that time period, and I think that’s why we love photography so much, and are drawn to that one,” Kipner added. “Baron told us how he photographed so many people while he was on the stage, as he was interested in the crowd. That’s what I was interested in, too.”

Besides serving as the helmer and cinematographer, Jackson also cherished having the opportunity to produce ‘Sophie and the Baron,’ and shared what the experience was like throughout the production. She admitted with a laugh, “I was bossy to Sophie at times! We debate who’s the bossiest-I think it’s Sophie, but she thinks it’s me!

“But it was a great experience, and an honor. It’s a lot to wear a lot of hats, and figure out how to run everything. But I think that’s why we got what we got,” the filmmaker also noted.

“It was your vision, and the producing helped bring that all together,” Kipner chimed in.

“Yes, it felt very organic. Since there weren’t a lot of people on set, we were able to capture many more intimate stories between the two of them,” Jackson added.

Once the principal photography was completed, the filmmaker also embraced the experience of putting the final version of the movie together with editor Lauren Brown. “I edit with one of my best friends from film school at USC, Lauren Brown. We got together over the weekends and shaped the film’s story over three years. It took a long time because we had a lot of footage,” she shared.

“During the quarantine, we were really able to get together every day and focus on it for several months. COVID made the editing process complicated, but we wore masks and got tested, and choose not to see anyone else. We were in our own little bubble, editing away,” Jackson also shared.

Once the editing process on ‘Sophie and the Baron’ was completed, the duo appreciated that the short was chosen to have its World Premiere at SXSW. Jackson shared, “I have to say, it’s been really positive. Of course, both of us would have loved to have gone to Austin. I’ve gone to the festival before, and it’s one of the funnest things in the world.”

“I would have loved to have gone in person!,” Kipner chimed in. “But you adapt, and the experience so far has been amazing.”

“I think the team at SXSW has been doing an incredible job of making it the best that it can be, given the circumstances,” Jackson added.

“But this way, everyone has access to it online, as not everyone would have been able to go in person,” Kipner pointed out.

“So it was really fortuitous that we were able to finish the film at that point. Then Baron was on text with me almost every day, making fun of me for not spelling Jimi Hendrix right,” the helmer added with a laugh. “He was so mentally there. He watched every cut and was super involved, and loved the film. So it’s a really heartbreaking thing, but also a beautiful thing, that he was able to be involved. We wish we could have told him about the premiere-he would have been so excited.”

“But we believe that he’s watching us, and knows about the screening,” Kipner concluded.