Cultures around the world have long alternately celebrated, concealed and manipulated their own histories in an attempt to find spiritual resonance in their surroundings. A prime example of society’s efforts to find that awakening came through the rise of paganism in the late 1960s and early 1970s, especially in connection with the era’s wave of feminism, ecological movement and folk horror films. The new documentary, ‘Woodlands Dark and Days Bewitched,’ explores the many inspirations, sides and impacts of the folk horror genre, from its initial soar in popularity half a century ago to its enduring legacy in modern culture.

The movie marks the feature film directorial debut of Kier-La Janisse, who also served as the writer and one of the producers on the feature. The filmmaker had made a name for herself by working as a movie editor, film festival programmer, publisher and author of the cult film analysis book, ‘House of Psychotic Women.’ She showed her talents as a helmer when the documentary, which hails from production-distribution company, Severin Films, had its World Premiere this past March during SXSW Online, as part of the Midnighters section.

‘Woodlands Dark and Days Bewitched’ explores the folk horror phenomenon from its beginnings in a trilogy of movies – Michael Reeves’ ‘Witchfinder General’ (1968), Piers Haggard’s ‘Blood on Satan’s Claw’ (1971) and Robin Hardy’s ‘The Wicker Man’ (1973) – through its proliferation on British television in the 1970s and its culturally specific manifestations in American, Asian, Australian and European horror, to the genre’s revival over the last decade. Touching on over 200 films and featuring over 50 interviewees, including with filmmakers Robert Eggers (‘The Witch’), Alice Lowe (‘Prevenge’), Emma Tammi (‘The Wind’), Mattie Do (‘The Long Walk’) and Kevin Kölsch and Dennis Widmyer (‘Pet Sematary’ 2019), the documentary chronicles how people search for spiritual resonance all around them.

Janisse generously took the time during SXSW in March to talk about directing and editing ‘Woodlands Dark and Days Bewitched’ during an exclusive interview over Zoom. Among other things, the filmmaker discussed that she became attached to make her feature film helming debut on the documentary after the idea started as bonus content for the re-release of ‘The Blood on Satan’s Claw,’ after which the production and distribution company she works for, Severin Films, decided she would be the right person to turn it into a full-length movie. The filmmaker also expressed her gratitude that the documentary had its World Premiere at such a prominent festival as SXSW.

The conversation began with Janisse explaining what inspired her to make the movie, and how the project came together. “Well, it started at Severin Films, which is my day job; I specialize in reissuing classic horror and cult titles. Originally, this was going to be a 30-minute extra bonus feature for the re-release of the movie, ‘The Blood on Satan’s Claw.’

“So it started off as a very modest project that focuses on British folk horror. But then it kept expanding beyond that, and my boss at Severin Films empowered me to keep going. He saw potential in it, and thought a lot of the speakers were really interesting, and they were bringing up ideas that were challenging the pre-conceived notions that folk horror was based on a lot of the British traditions,” the director also noted. “Over the last three years, it grew into it’s own beast.”

Once Janisse signed on to turn the idea into a full documentary, she cherished having the opportunity to make her feature film directorial debut on the project. “My job at Severin Films is usually editing, and working with a director and producers and following their instructions. I wasn’t necessarily expressing my own ideas on the projects,” she shared.

“So this was the first time that I was envisioning what the film would look like, who the interviewees would be, what kind of questions I wanted to ask them and what kinds of films I wanted to talk about,” the filmmaker revealed. “So it was daunting in a way because I hadn’t had that level of responsibility before.

“I do have a background as a film programmer, so I used to work at a lot of film festivals doing film programming. I was also a journalist in the ’90s, so I had a lot of contacts,” Janisse divulged. “So even though I hadn’t made a film before, my past experiences really positioned me really well to be able to reach out to the right people and arrange interviews.

“The interviewees were all over the world, but we didn’t have the budget to have a specific camera team that flew all over the world to speak with them. So we had to find camera people who often just lived in those places,” the helmer revealed.

“We had about 30 different camera people all over the world, and we would give them all certain technical notes, in terms of how we wanted the interviews to be shot. But everyone’s gear was different, we tried to match everything, but all of the footage still looks very different from each other,” Janisse explained.

“We also sent the camera people questions to ask the people who were being interviewed. Sometimes, if the time zones allowed for it, I would go on Zoom so that I could actually ask the questions, so that we were communicating directly during the interviewing process,” the filmmaker also divulged. “I’m really grateful that due to some of my past work, people all over the world were willing to help make this movie.”

Further speaking of the people she spoke to during the production of ‘Woodlands Dark and Days Bewitched,’ Janisse shared what the process was like of securing the interviews for the project, and how she decided what she would ask them. “Since it had started off as a smaller piece that was just going to be about British folk horror, my first round of questions was focused on that subgenre. A lot of the questions were very basic, including, What do you think are the most important British folk horror films? What do you think are the most underrated folk horror films? Who are the creators of folk horror?,” she confessed.

“A lot of the people I approached in the beginning had a clear connection to folk horror. But as the process went on, I also involved people who had different kinds of historical expertise on it,” Janisse continued.

“I needed people to talk about specific things that are rooted in history. So I went from speaking to people about folk horror to people who specialize in Southern Gothic. I also spoke to filmmakers and scholars in Brazil who could specifically speak about the colonial history there,” the director noted.

“So a lot of the experts became more and more niche as the project went on, as I needed people to clarify certain ideas, and contextualize certain types of films historically. So by the end of the interviewing process, there were a lot of scholars and people we spoke to who have written different books about such topics as folk lore and occultism that weren’t necessarily related to folk horror, but were needed to create clarity for the story,” Janisse explained.

Once she finished interviewing the people who she felt truly contributed to the movie’s story, the filmmaker embraced going back to her editing roots to put the final version of her first feature together. But she also relied on her collaboration with her fellow editors, Benjamin Shearn and Winnie Cheung, to put the final draft together.

“When we first started the film, I was actually editing it myself. It wasn’t until a year-and-a-half into the production that we looked for an outside editor who was more experienced than me,” Janisse revealed.

“During the first year-and-a-half that I was editing the film, I had made a rough assembly. I had gone through all of the interviews and selected what I wanted, and put them in order in a timeline,” the editor shared.

“I then started pulling clips from specific films that I thought could illustrate some of those ideas they were talking about,” Janisse explained. “But in many cases, they were sound clips. Those are the clips where the interviewee stops talking, and then the clip starts with the full sound, and there’s dialogue in the clip. But that dialogue becomes part of the script of the movie. So the interviewees and the dialogue in the clips are all telling the narrative.

“So I had done a rough edit that included clips that I thought needed to be included in the story. I then started working with my first editor, Benjamin Shearn, over the course of three months. He then ended up needing to leave because of an injury. But he was great, because a lot of that footage helped transform what I already had,” the filmmaker divulged.

“Then about four months after he had to leave, I was still looking for a new editor, as I was quite picky about it. I was looking for someone who really understood my vision for the film, and I didn’t have to constantly tell them every little thing to do,” Janisse continued

“That’s when we found Winnie Cheung, who’s a filmmaker in her own right; she’s also a director and producer. She took over the project and picked a lot of the clips. She spent many hours watching films and going back and forth with me,” the helmer noted.

“I also made a written version of the script that she could also reference. She would make the edits, and pulled in additional clips that she thought would fit. Sometimes they worked better than I ever would have thought,” Janisse admitted.

“Other times, I realized that my script was off, and I wasn’t really making the right connections, so we needed another sentence here or there. So I would go back and look through the raw footage to see if I could find something that someone said in the interviews that would fuse two ideas together,” the editor shared.

“So there was a lot of back-and-forth with the editors, and it was intense. There was a lot of work hours, particularly as I was trying to explain to them what I was thinking, which isn’t easy when you’re not in the same room with them,” Janisse divulged with a laugh. “But luckily, I found the right people, as the project would have fallen apart if I hadn’t.”

Once the final draft of ‘Woodlands Dark and Days Bewitched’ was finished, the director cherished having the opportunity to premiere the project at SXSW. “It means everything to me to bring the film to SXSW, as this is my first film. So I’m not only proud that we finished the film, but also that we were accepted into a festival this big and visible.

“It was judged on its own merits, and not because I know everyone who works at the festival, which is gratifying. I’m still taken aback, and can’t believe it premiered at this big festival; it’s all really exciting,” Janisse concluded. 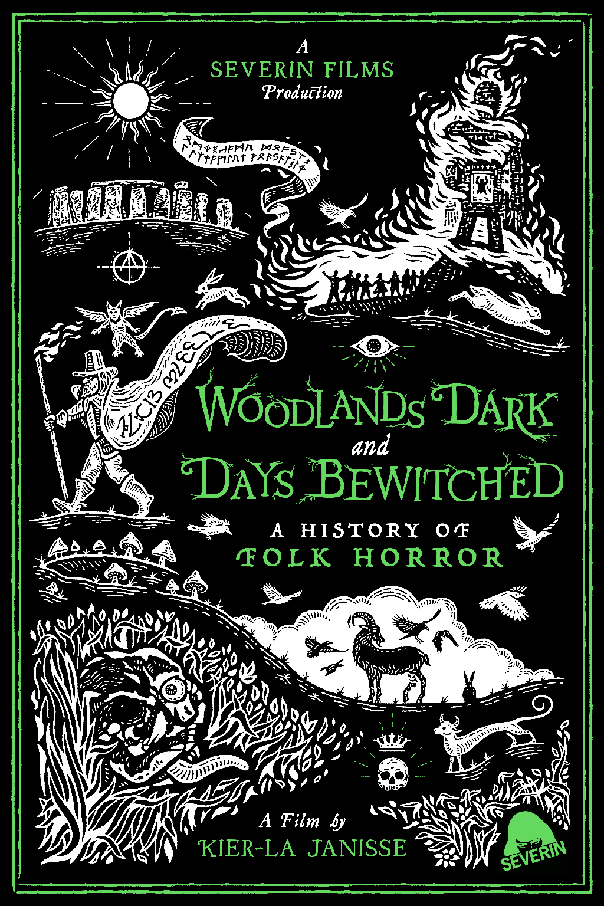